Students Empowering Each Other Through Language Coaching  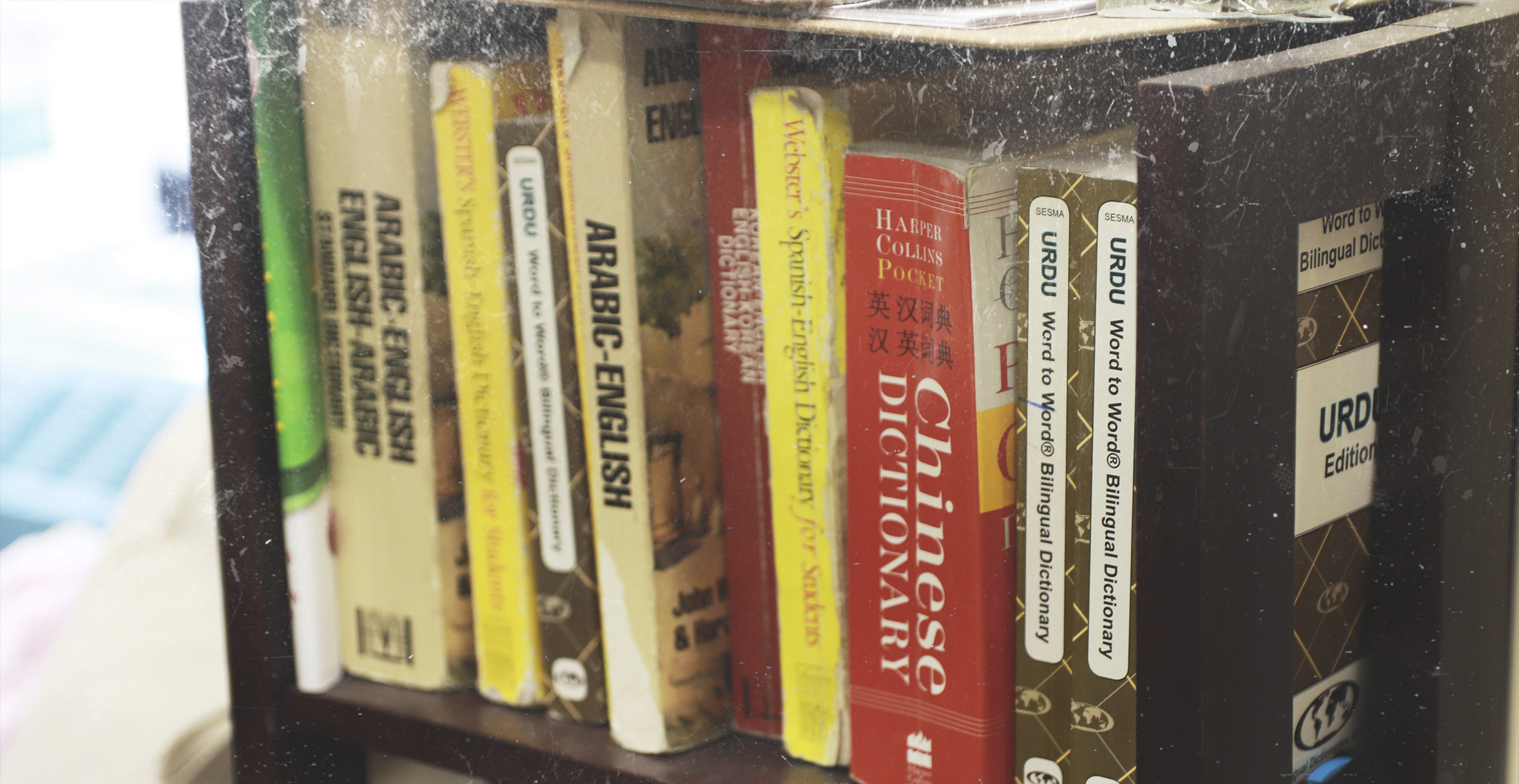 I was at a loss for how to help one of my students.  A first-year high school student who had been in the United States for less than 2 months and had an “entering” score for English language proficiency was supposed to write an essay that deconstructed the types of arguments an author used to prove that viruses were living organisms.  I didn’t know if he knew what a virus was.  I didn’t know if he knew the different types of logic used to create arguments.  I didn’t know if he knew even what an essay was.  While I have rudimentary knowledge of the Spanish language, I knew that I wouldn’t be able to find the answer to any of these questions by relying on my second language skills.  I left the science classroom to get a bilingual dictionary when I happened to cross paths with an 11th grade student of mine who had recently been asked to do a similar task in his chemistry class.  I told him the situation and asked if he could help explain and listen to my 9th-grader.  The older student, using his content knowledge and multilingual skills in English and Spanish,  helped the 9th grade student understand the task being asked of him and break down the problem into smaller chunks.  When the class was over, the 11th grader told me that he wished he could work one-on-one with this student more often and said that we should have a tutoring program for other students like this boy.  And that’s when it dawned on me – why not create a program where students use their home language skills together with their English language and content knowledge to assist other students in language development!  And so began our Language Coaching journey.

International High School at Langley Park has just begun its fourth year of existence.  We are located across the border from Washington, DC, in Prince George’s County, Maryland.  We work with students from around the world, and because many are recent arrivals in the U.S., some students have had little English language instruction.  Some also have had interrupted education with gaps that needed to be filled with content knowledge.  This past school year we enrolled an increasing number of students who had only emergent English language skills, who had low literacy skills in their home language, or who were missing formal schooling.  While our school prides itself on differentiating instruction for all our learners, we were challenged to do this within the confines of the classroom for this subset of students.  Our ESOL team wondered how to provide language services individualized for our Newcomer/SLIFE students. Language Coaching became one way for our school to meet this need.

The 11th grader, Mario, who had helped me was just as interested as I was in getting this program started.  He had been a newcomer himself several years before in middle school, and he promised himself that if he ever had the opportunity to help someone new to the English language, he would do just that. Mario and I with support from Internationals Network for Public Schools staff got started.  We created a list of Upper House students who could be potential coaches and 9th grade students who were potential tutees.  I believed that the age difference would be beneficial as the older students could serve as guides to the younger ones.  Mario began interviewing the students on his list to learn their interest levels, dedication, and learning styles.  With this information he began to create pairs of coaches and students.  Soon we had a core group of eight Upper House students who were willing to dedicate their mastery time to helping these newcomers.  Before starting, we provided some training for our coaches.

We knew that in order to effectively help students with emergent English and gaps in schooling, instruction would have to be tied directly to student interest and need.  Some potential tutees wanted help with speaking, while others wanted to learn vocabulary.  One of our staff members provided Reading “PD” seminars for our language coaches over several weeks to show them how to provide reading instruction to their learners.  Student coaches also learned about several online websites that could be helpful in building English literacy skills.

These pairs of students have met every other day for more than a half year now.  At any given session, my classroom is abuzz with a range of activities including practicing pronunciation and vocabulary, listening to English music, playing literacy games, reading stories, and working on class assignments. Both coaches and tutees are actively engaged in activities that allow them to practice English, increase academic and tiered vocabulary, and build relationships. 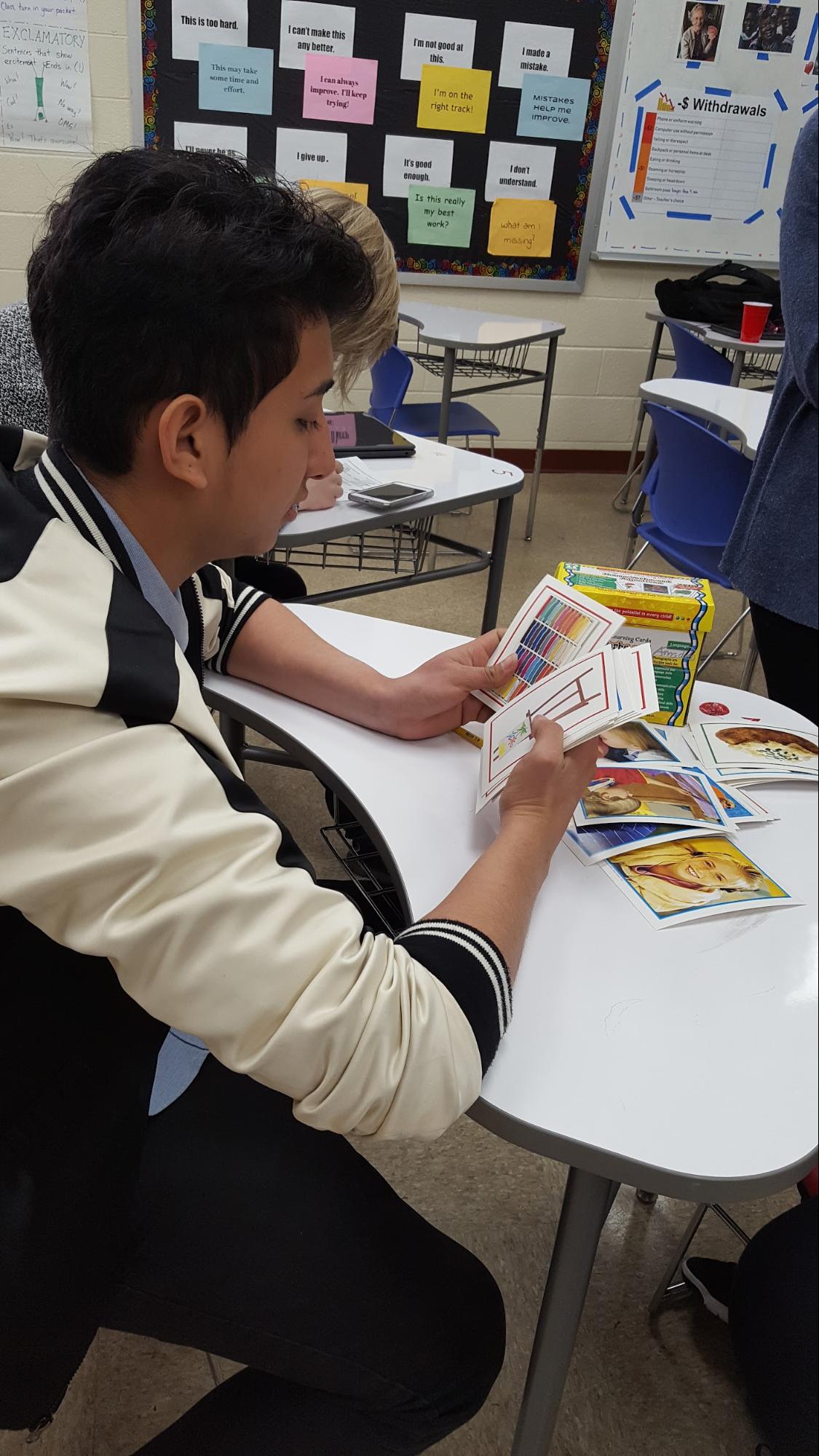 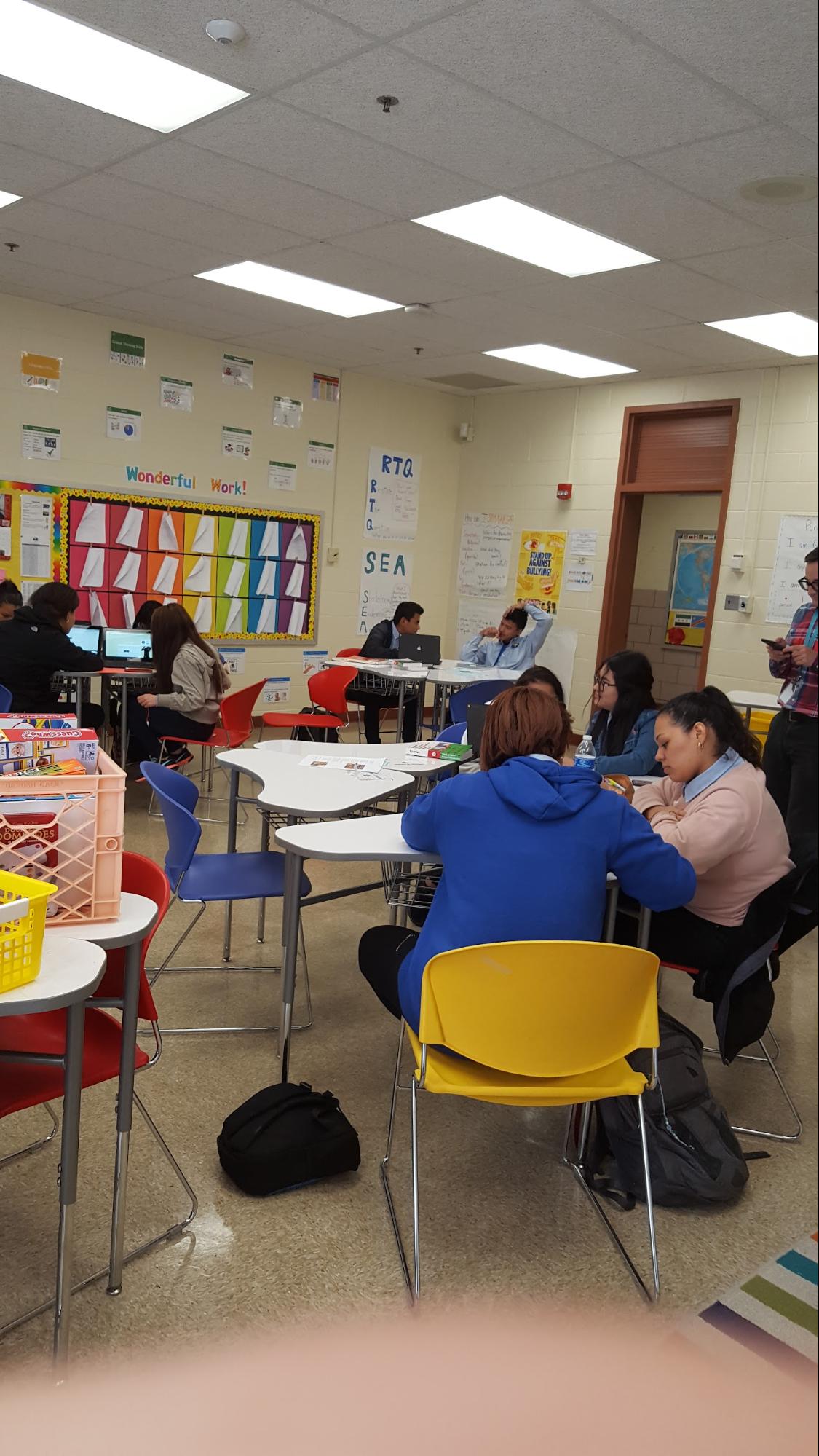 I have learned many lessons as a result of Language Coaching.  While I have training in second-language acquisition and years of experience teaching English Language Learners, sometimes I miss my mark on how best to instruct students.  What I believe that students will find challenging to learn is not so difficult, or what I think will be easy is very challenging for them.  Having a student who has already had to learn English and content while relying on the home language work with another student can sometimes be better in certain circumstances.  For example, one of our coaches has successfully taught a SLIFE student how to read short stories by rewriting the text phonetically as it would be pronounced by a Spanish speaker and then translating it.  I never would have thought of that!

I cannot wait to see what will happen next for Language Coaching in the coming years. Already we have seen success with this program in various ways.  Our 9th grade tutees have been more successful in their content classes with extra support from their coaches who have provided additional scaffolding for them in their home language.  Language Coaching has also enabled our new students to have the confidence to increase their participation in classes.  Students practice speaking with their coaches beforehand and have been encouraged and inspired to use English more.  If their coaches can learn English, then so can they.  Our coaches also have seen benefits.  Having to explain content and particular features of English has helped solidify their own conceptions of these topics.  Our coaches have also begun to see themselves as school leaders who can empower and change the life trajectory of others by sharing their language skills and time.  Finally, Language Coaching has helped our students better handle social-emotional issues that can arise when moving to a new country, including acclimation and reunification matters.  Language Coaching will continue to evolve as our school discovers how the program can best serve the needs of our student population.  Perhaps some of our tutees will become future coaches to groups of newcomers in the years to come.  The possibilities are limitless!

Back to Educator Voices